Ever since moving to Monterey, California for graduate school in 2017, I thought I had left behind the unforgiving weather in the Sunshine State. Certain aspects I simply do not miss, one of them being the annual hurricane season. Unfortunately, each new hurricane season becomes more difficult due to climate change, and preparedness is the only aspect individuals can attempt to control when up against mother nature. This year’s hurricane season has already left a mark in history, with Hurricane Florence hitting the Carolinas and Hurricane Michael slamming Florida’s Panhandle. As a VSFS intern with the Smithsonian Cultural Rescue Initiative (SCRI), I have actively participated in recovery efforts by providing resources to affected institutions or simply empathizing with the individuals who may have lost everything. Even though several hundred miles separate myself from the affected regions, no distance is too great to lend a helping hand to those who need it the most.

This proved true throughout the Hurricane Florence outreach process. Museums, planetariums, arboretums, and art galleries were just a few types of institutions affected by the deadly storm in both North and South Carolina. Prior to outreach efforts, I assisted in creating a platform for record keeping via Google Suite. A Google Form version of the outreach survey allowed interns to preserve the responses of the institutions on a Google Spreadsheet. Through the utilization of Google Voice, I was able to connect to numerous organizations with ease and administer our outreach survey.

Not only were the individuals willing to take the survey, but they also shared the lessons they learned with me and eagerly described the plans they had to pull themselves through the recovery process. On the other hand, I reached a handful of organizations that did not want to hear what I had to say and simply hung up. Instead of becoming angry towards the cold gesture, I reminded myself that it was not a personal attack. Instead of dwelling on the negative and letting the event deprive me of my joy, I decided to focus on the positive remarks I received throughout the outreach. Impactful stories including museums created by families in order to preserve history highlighted the importance of hope and restoration. With each encounter, I was able to carry away a feeling of satisfaction and determination for future assistance with any upcoming disasters. 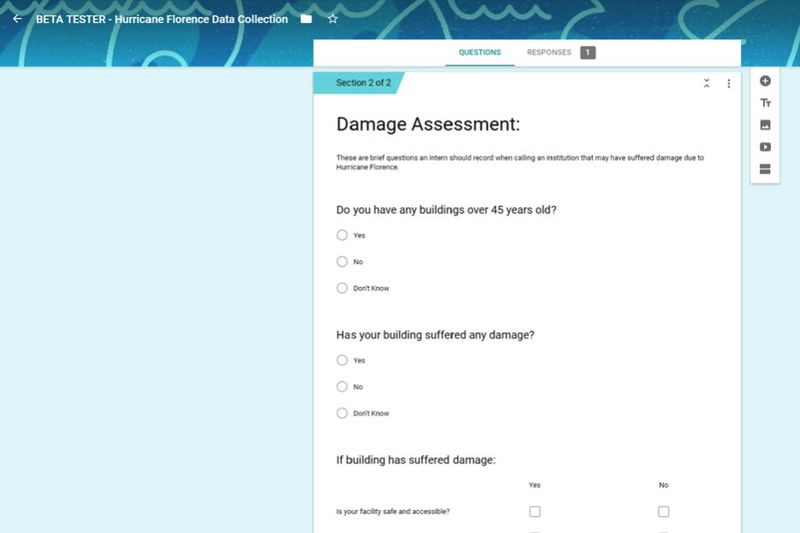